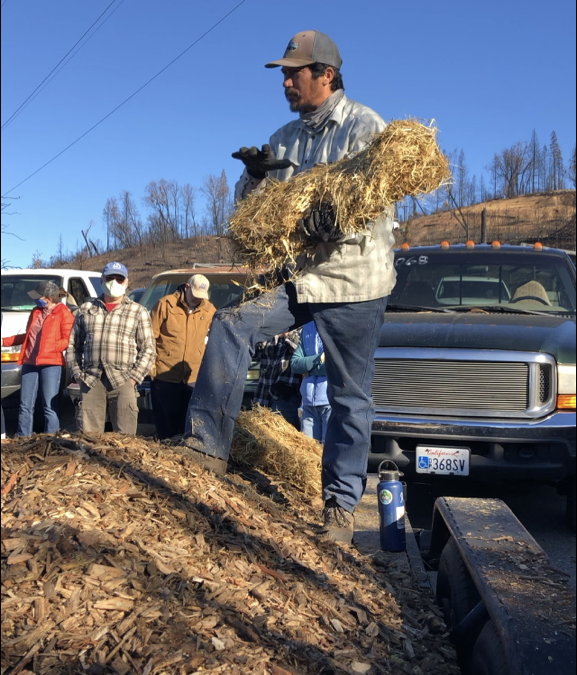 In early September 2020, the Creek Fire stormed through the Pine Ridge Community on Cressman Road, severely burning the landscape and many of the homes that were nestled amongst the trees. Before the burn, the trees and vegetation did more than just frame the beautiful view and provide shade, but their roots also held the steep slopes in place and kept soil from being washed away. As winter quickly approached, the community looked with concern at the charred slopes as large loads of soil mixed with branches, rocks, and other debris could plug culverts, causing roads to blow out.

To limit the erosion of vulnerable slopes surrounding roads and to promote community support and healing, the Pine Ridge Property Owners Association (PRPOA), Sierra RCD, and other local groups organized a community workday for volunteers to come together and spread mulch. On December 5th, a sunny Saturday morning, over 40 volunteers of all ages gathered at the entryway of Cressman Road to learn how to spread straw and woodchips to reduce the amount soil, also mixed with toxic ash from burned houses, from damaging culverts and entering streams below.

The volunteers laughed and greeted each in the shadow of a charred welcome to Pine Ridge sign that miraculously survived the fire, a symbol of 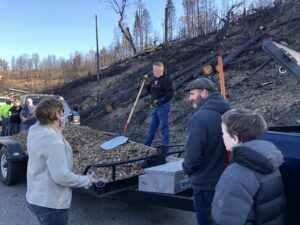 the community’s resilience and determination to rebuild. The group listened as conservation professionals and community leaders explained that mulches such as rice straw and woodchips form a barrier between exposed soil and rainfall, and potentially limit the amount of soil eroded by snowmelt. When spread 1-2” thick on the landscape, mulch also retains moisture for seeds in the soil, increasing their germination rate. Chris Velez from the Intermountain Nursery demonstrated the even spreading of the rice straw that the nursery had donated and advised wearing a mask during application to avoid breathing in silica particles.  It is also important to note that using Certified Seed-Free straw is critical, as invasive species hitchhiking in the straw will outcompete native plants. Sierra RCD also donated 280 cubic yards of chips, and PRPOA President, Curt Chastain, demonstrated how to toss the chips on the uphill side of the road, but not applying them more than 1” so as not to deter vegetation growth.

After fueling up on delicious breakfast burritos, everyone broke up into groups to either spread straw on the downhill slope or toss chips on the uphill side. Trucks pulled trailers piled high with chips and volunteers flung the chips as far as they could up the steep banks. Chip-tossing competitions ensued, and tossing techniques were compared and modified.  The motivated group made quick work of spreading the straw and chips, and by noon, were enjoying either a vegetarian or chicken and rice lunch. Looking back along the road, you could see a wide swath of mulch on either side, which would help hold the soil for the rest of the winter. The PRPOA would check culverts after each rain to make sure that the straw and chips did not add to the problem of blocking it, and after the last few rains, it was reported that the mulch had stayed in place and only one culvert required debris removal. 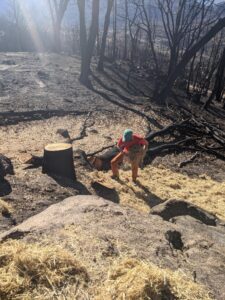 The District has two primary watersheds, the San Joaquin River and the Kings River, which greatly affect the foothill and valley floor.

Watershed information is available from the State Water Quality Resources Control Board and US Forest Service. Additional watershed/water flow information may be obtained from PG&E and Southern California Edison (power dams and snow packs), and the Bureau of Reclamation (Friant Dam), and the Army Corp of Engineers (Pine Flat Reservoir) and several irrigation districts.

Flooding and soil erosion due to water movement has been a historical problem. The Army Corp of Engineers constructed Francher-Redbank Creek Project, which has reduced the flooding problems on the valley floor.

Flood prone areas are identified in the Flood Hazard Analysis of Northeast Fresno and the more general Flood Hazard Study Maps that are used by the Housing and Urban Development Department.

Canals and irrigation districts on the valley floor provide agricultural water during the dry summer months. Their boundaries and practices can affect the SRCD conservation efforts.

Groundwater and recharge capabilities of land on the Valley floor and the foothills are an important concern addressed in the Fresno County General Plan. Specifically discussed are the increased pressure on water resources and diminishing capacity for recharge caused by conversion of agricultural and rangeland to other uses.